Calendar images for 2021 using images from Orkney in 2020 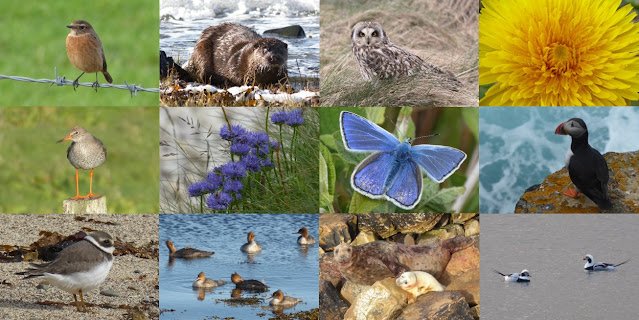 Popular posts from this blog

September 27, 2020
There are signs... amongst the day-to-day happenings, there are definitely signs. In Orkney, Autumn is not so much a season, it's the dawning realisation that birds you have been listening to or watching for several months are no longer there. Then, no sooner than that thought has flickered across your mind, the empty skies, fields and bays are filled with different species, a new palette of colours, sights and sounds. And, if you're a leaf, Autumn lasts about 24 hours. Plants don't tend to be sentimental, they can't afford to be. For them, Summer to Winter is like a switch being thrown. This week, many flocks of Pink-footed Geese winged their way south through the scudding Orcadian sky. Energetic V's of "Wink, wink" sounds battling the gusting breeze as they headed for estuaries far from the Arctic Circle. I saw my first Whooper Swans of the Winter, a group of a dozen, counter-intuitively flying north, but I think they were headed for St Peter's Pool
2 comments
Read more

October 12, 2020
On a showery Sunday afternoon sandwiched between a dreich Saturday and a wet Monday, that briefest of phenomena, an Orcadian Autumn, put in a surprise appearance midst some watery sunshine. It wasn't New England in the fall, it wasn't a vast swathe of colour across a broad landscape, it wasn't even knee deep in leaf litter, but it was magical in its way. The Rosa rugosa was swinging its hips in a dashing red and cerise number... Elder bushes were flaunting greens and purples... There were still a few Buddleia blooms on display... And Rowans were laden with ripe red berries which, on another part of the walk, were being much appreciated by migrating thrushes: Redwings, Fieldfares and Blackbirds. I have no idea what this is, other than gorgeously pink. One particular Rosa rugosa was in a fiendish mood, showing an impressive set of snarling,  sharp teeth. There were a few insects about, not many, but the fading light did add a splash of colour to this fly's wings. Lichen w
6 comments
Read more