For a Sunday morning walk, something delightfully unstrenuous was required, as a busy previous week had included a Covid jab and a day trip to Shetland (it's called a day trip because it's 24 hours door to door). Cue a circular wander from Orphir Village to Swanbister Bay and back via Gyre Road. 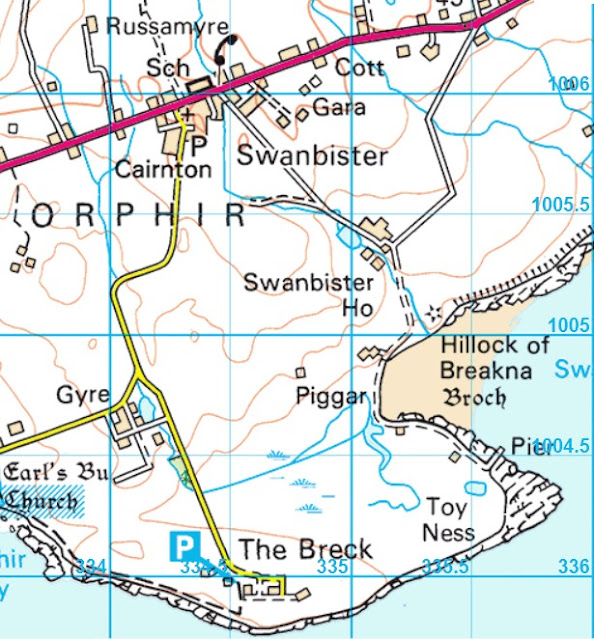 Things got off to a grand start as we left the village, when a pair of wagtails flew over... they were Greys, my first of the year.
The weather forecast had predicted cloudy but dry all day, with a generous westerly breeze gusting 25mph. Passing Swanbister House, it began to rain, so the immediate Fuschia looked bleak. 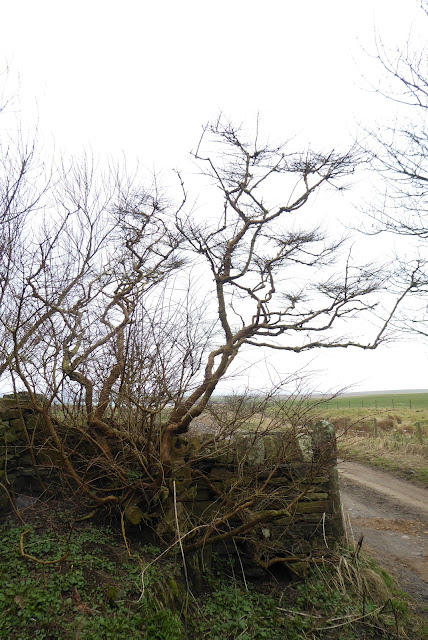 Further down the track to the coast, a Sycamore tree was showing off its buds to good effect. 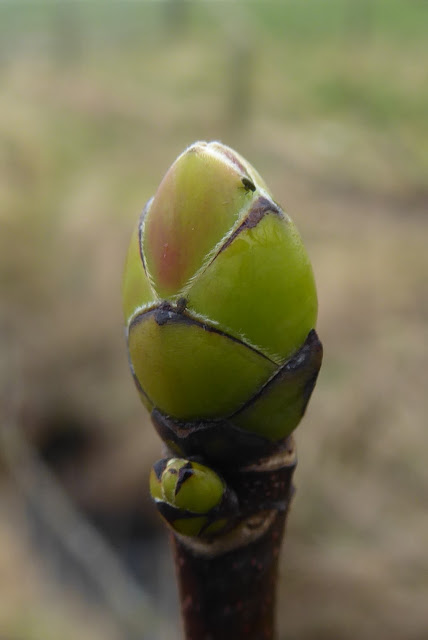 As we reached the shore of Swanbister Bay, a pair of Gannets flew by, another first for the year... yay! There were plenty of waders on the beach: Oystercatcher, Redshank, Bar-tailed Godwit, Turnstone, Ringed Plover, Dunlin, Curlew. 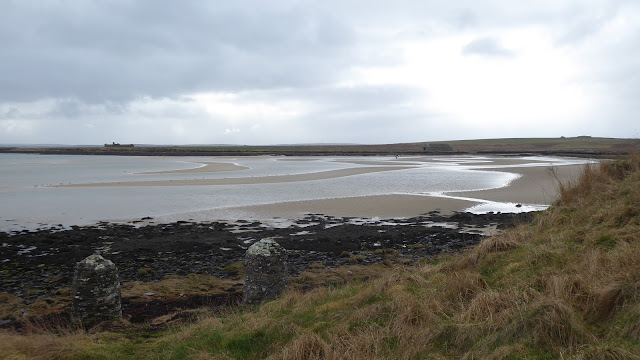 Walking around the bay, the light changed a little, so I took the opportunity to try a panoramic shot with my phone.

Taking shelter from the wind and rain in the lee of the old pier, we watched a pair of Great Northern Divers which were preening not far from the shore. Then it was time to marvel at the various lichens adorning the stones of the pier. 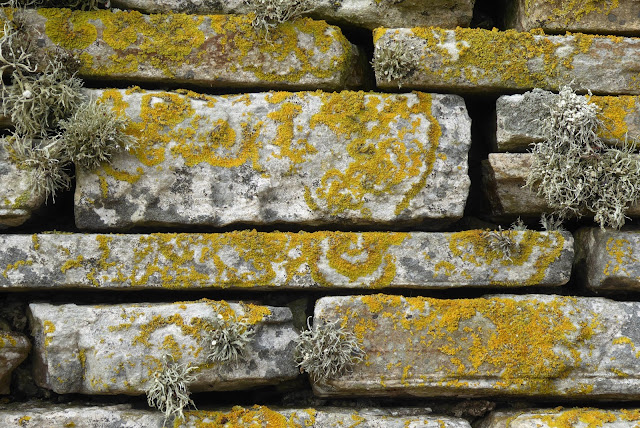 I was particularly taken by the turquoise trimming on this specimen, which I am guessing is the fungal component of the lichen, busily colonising new territory. 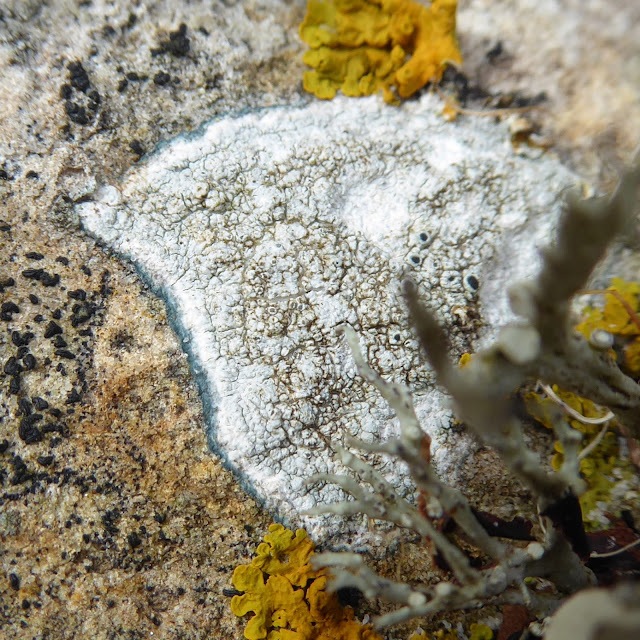 In Scapa Flow, a couple of oil tankers were carrying out a ship-to-ship transfer of some fossil-fueled product. 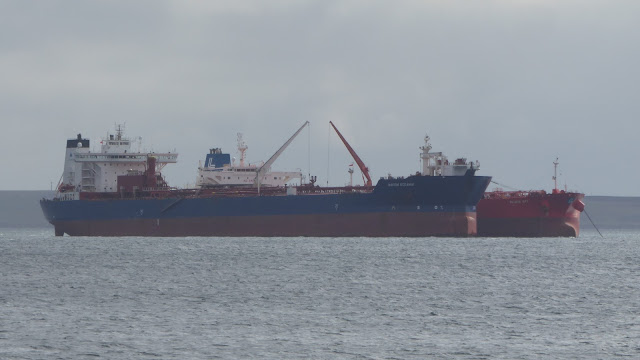 Turning back inland, the verge of Breck Road was beginning to show signs of this year's Butterbur flowers. 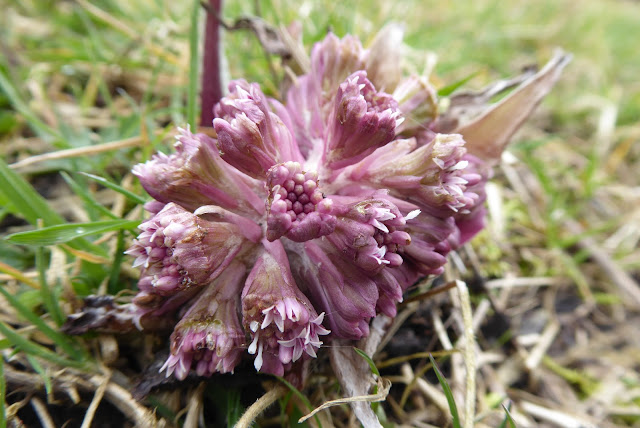 And in Gyre Wood, the scene was looking quite picturesque, although I keep telling myself that I must remember to bring a big bag to pick up all the plastic detritus which has been blown into the wood and gathers on the banks of the burn. 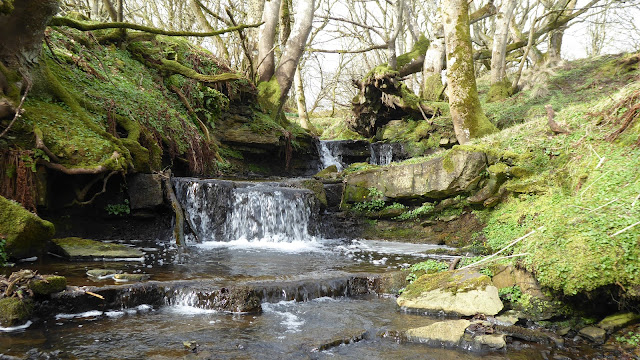