One good tern leads to some bother

The past week has seen me on a bit of a thrash around the isles, with work on Eday, Stronsay and Westray. Only Stronsay provided any time for nature-watching, although my 'office' for the day on Eday had calling Red-throated Divers flying overhead.

By way of relaxation, on Saturday I helped out at an event for the Orkney Nature Festival, as the Orkney Field Club had organised a walk through Russadale. We had Hen Harriers and Redpolls to watch, whilst the air was filled with the sounds of Cuckoo, Willow Warbler, Wren, Blackbird and Stonechat.


Sunday's meteorology wasn't particularly conducive to going outdoors, but we made the most of a short weather window (too short, as it turned out) to walk a little of the west coast of West Mainland. There are many more species of wildflowers in bloom now, with colourful carpets beginning to form along the clifftops.

With breeding birds either being on eggs, feeding chicks or trying to shepherd their fledglings, everything seemed to be chasing everything else in a non-stop horizon to horizon dogfight. 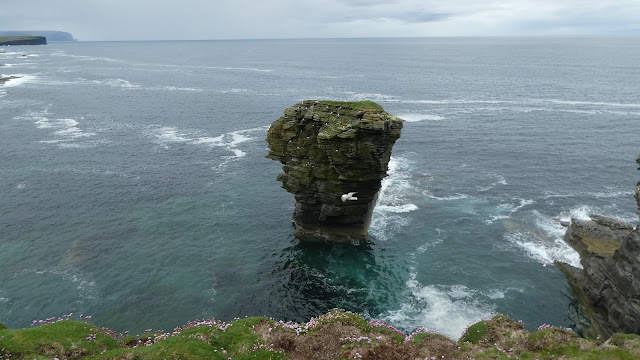 This Summer we thought we would be mostly worrying about auks after the terrible wreck in the North Sea in late Summer 2021. We are still concerned about their current numbers, but the biggest and most obvious worry is for Great Skuas, or Bonxies, which are succumbing to Bird Flu at a rate of knots. They're not everyone's favourite bird, possibly no-one's, as they are piratical thugs to other seabirds. They're a top predator, just like a Lion, so they definitely suffer a bias for not having fur.
Some rather sobering statistics appeared recently in a post on the RSPB Shetland Facebook page:
"Avian Influenza (Bird Flu) of the Highly Pathogenic H5N8 strain was detected in Scottish populations of bonxies last summer. This predatory seabird species has a small and restricted global breeding range, with a world population of around 16,000 breeding pairs. At the last census in the year 2000, 60% of the world breeding population was found in Scotland, with over three-quarters of Scottish birds nesting in Shetland and Orkney."
Which, I guess, means that large losses in the Northern Isles have a big effect on global numbers of Great Skuas.
Sadly, most coastal walks at the moment will feature at least one scene like this... 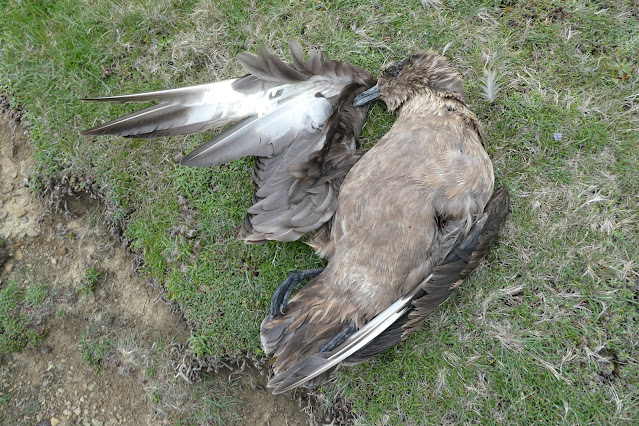 And our trauma wasn't over yet. My attention was drawn to a kerfuffle right in the middle of the coastal path, which resolved itself into a moth larva being attacked by red ants. I am advised that the caterpillar may well be that of a Large Yellow Underwing (thanks, AF). 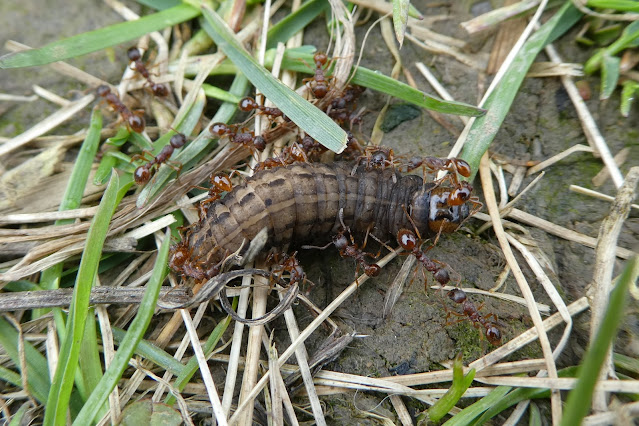 In happier news, since the previous post, I have received half a dozen reports of Large Red Damselflies on the wing in Orkney, so it just remains for me to see one on home turf.